The advent of broadband has dramatically altered our expectations about what we can do from the comfort of our own home. The ability to buy groceries, order a new dress, stream HD movies, make video calls and download files all at the same time has changed the way we think about where we live. With that in mind, it is no surprise that broadband speeds play an important role in house-hunters and landlords’ decisions when looking for new homes or buy-to-let properties.

Research by internet service provider KC suggests that three out of four people take broadband speeds into account when choosing a home. Rightmove certainly agree, with results of their recent survey indicating that people now value broadband speeds just as much as a property’s proximity to a good school or transport infrastructure.

Of course, out of everyone it is the younger generation who place the most emphasis on internet speeds, with Rightmove reporting that 18 to 35 year olds are influenced by how fast a connection is. Around half of this age bracket say they would reconsider a property if they found that the connection speed was inadequate for their needs.

As the world becomes ever smaller and more integrated via the web, there is a greater amount of people working from home instead of commuting to an office. ONS reports that the total figure of home-based workers in the UK is currently 4.2 million; nearly 14% of the entire UK workforce. In SK4, 5.8% of the workforce works from home, equivalent to around 1,030 people. Those who do work from home might not have to worry about the daily grind when commuting to work, but they will want to make sure their internet speed does not cause them a daily headache.

Even for those not working from home, broadband has become an essential part of everyday life. Video messaging services like Skype and FaceTime have changed the way we communicate, while live streaming of music and movies on sites like Spotify and Netflix has made the need for an uninterrupted internet connection that much more important. 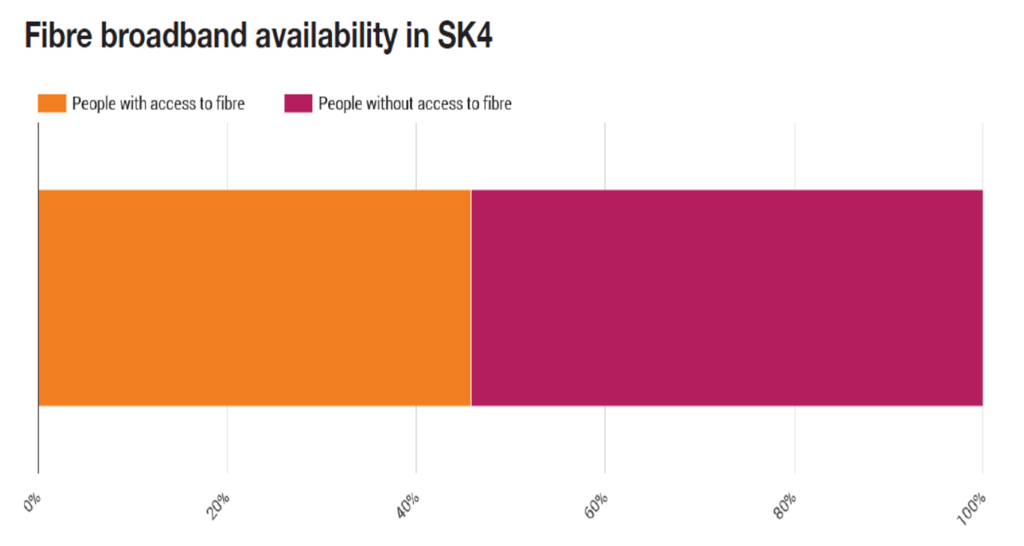 A survey conducted for the Halifax showed that over 20% of people surveyed would be willing to pay more for a property with a fast broadband connection than for one without. Broadband provider Hyperoptic also recently found that people were willing to pay up to 11% more for a property with 100Mbps broadband speeds. Hyperoptic also found that 60% of the people they spoke to said an internet connection was more important than having a garden, or good neighbours. These results just go to show what an important role superfast broadband plays in people’s lives.

But what broadband speeds can you expect? Fibre broadband is available in SK4, with 45.8% of users having access to it. The maximum speed you are likely to get is 108Mbps, with the average speed around 25Mbps, though minimum speeds of 6Mbps are possible.

The government aims to have superfast broadband available to 95% of UK homes by late 2017. However, this is already a delay from the intended 2015 release. With that in mind, many potential house buyers are keen to know broadband speeds before they move into an area.

If you would like more information on broadband speeds in relation to your property or a property you are interested in purchasing in SK4, drop by our office and we will be happy to assist faster than you can say “megabytes per second”.